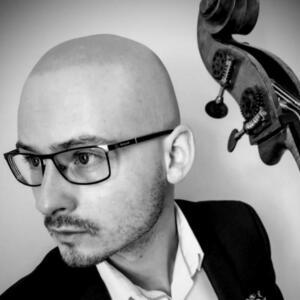 Damian Sobkowiak is one of the most talented double bass players of the young generation. Scholarship holder of the Young Poland 2019 Program, winner of the 10th National Double Bass Competition named after A. B. Ciechański in Poznań, as well as a laureate of many competitions in Poland and abroad. Among others: Finalist and winner of the extra-statutory prize funded by the company "Thomastik" during the International Double Bass Competition organized as part of The European Biennal Double Bass Cogress in Amsterdam, semi-finalist in the 19th International Double Bass Competition. Leos Janacek in Brno, a semi-finalist in the 4th International Double Bass Competition. Sergiusz Kusewicki in Saint Petersburg, the winner of the 3rd prize in the 3rd National Double Bass Competition in Łódź and a multiple scholarship holder of the rector of the Academy of Music in Poznań for exceptional artistic achievements. He participated in numerous master classes with world-famous virtuosos, including: Thierry Barbe, Catalin Rotaru, Dan Styffe, Eugene Kolosov and Rinat Ibragimov. He started his career as a professional orchestra musician by taking the position of the first double bassist of the Polish Sinfonia Iuventus Orchestra in Warsaw in 2014-2016, then he started permanent cooperation with the Poznan Philharmonic. T. Szeligowski in Poznań. Currently, he is a double bass player and a chamber musician in the Polish Radio Chamber Orchestra "Amadeus", founded by Agnieszka Duczmal. Cooperation with Amadeus means regular concerts in the Adam Mickiewicz University Hall, as well as numerous foreign performances, e.g. Touring Japan and Mexico in 2018, as well as last year's European tour in cities such as Paris, Madrid, London, Edinburgh and Brussels. Due to the current epidemic situation, the March Tourne of Cuba has been cancelled. Damian Sobkowiak, immediately after completing his master's studies, began his scientific activity related to the field of music transcription as a doctoral student at the Karol Szymanowski Academy of Music in Katowice. I. J. Paderewski in Poznań, in the class of prof. Piotr Czerwinski. In December 2019, he obtained the title of Doctor of Arts in the field of musical arts in the artistic discipline of instrumental studies (specialty double bass). He is an active participant in ongoing scientific conferences and a co-author of many symphonic, chamber and entertainment albums. Damian Sobkowiak regularly performs as a soloist on the Polish and foreign music scene. He has performed as a soloist with the Lublin Chamber Orchestra, the Poznań Chamber Orchestra, the Zielonogórska Philharmonic. Tadeusz Baird, as well as in cooperation with Sinfonia Varsovia.